The Temple of Promise (Design Proposal)

This page presents the design concepts for the Temple of Promise proposed for Burning Man 2014. The proposal includes still images, video, and a written description of the design concept, features, and underlying thinking.

No one at the burn is there by accident – each person has taken a journey to get there and the  Temple of Promise is rooted in the idea that the architecture of the temple should support a continuation of this journey.

The Spire.
The entrance to the temple is a great spire in the cathedral tradition of inspiring awe through immensity. But beyond this initial promise, entering the structure quickly reveals that there is much more. It asks you to move deeper and, as the space constantly changes, you realize you are traversing a passageway. In the space of the spire itself, there are several things to note – first, at its base it is large enough to accommodate a very large gathering. There will be upper levels but they will not be accessible directly from the base – you must undertake the journey through the temple to get to them. The spire is an open mouth design. This exposes it to the elements and means that a dust storm can reach into the interior unimpeded. We feel this is a perfectly acceptable relationship between nature and the temple (the spiral passageway also offers considerable space in which to take refuge under white out conditions). We are considering the possibility of Asian style lashed bamboo scaffolding as a major structural element of the design.

The Spiral.
The original design was simply this: a great spire that became a passageway and tapered gradually down from the immense until it was decidedly human scaled. The point of emergence (“exit” feels like the wrong word) would be less than 5 feet high so that most people would need to bow or duck to come out. But this linear design meant the temple would reveal itself in its entirety almost immediately. Exploring the possibility of a curve revealed that the journey could be made analogous to life’s journey – you can see for some ways both forward and backward but can never truly take in the entirety at once. The curve now follows the spiral of the golden mean and the curved path and steady transition in scale creates an emotionally transformative transition. During the day, we hope to illuminate the passageway with deck prisms from the maritime tradition of wooden sailing ships. They produce a lovely quality of light with intriguing caustics and their placement will be akin to beacons. By casting them in “sugar glass” they can be burned with the temple.

The Grove.
You emerge from the passage into the grove. The grove is ringed by a Mobius strip wall and its proportions – almost as high as it is wide across creates a space of deeply contemplative solitude. The only thing visible beyond the wall is the sky and the peak of the temple spire. The grove is so called because we hope to include a ring of Bonsai trees (under glass terrariums if need be) that will introduce a living element to the temple. We envision the Bonsai becoming a new tradition for temples going forward as they journey back into the world for the rest of the year and return again and again to temple each year – making the same annual pilgrimage as the rest of us. The alter will stand at the center of the grove.

The Alter.
The alter will rest at the center of the grove. As last year’s alter was a stone cairn of great solidity we feel it is appropriate to introduce an alter that is light and airy, stretching skyward. We also feel this would fit the personality of the Temple of Promise and imagine it made primarily of fabric.

The Climb.
After the grove, the structure will offer the opportunity to climb the spine of the temple on the outside. While the spiral through the covered tunnel is a cave-like experience, this will have the feel of ascending a mountain toward a peak. And this path under the open sky will be the very best way to take in the shape of the temple and understand the journey thus far in a new way. The walkway will lead back into the temple at the mezzanine level of the spire. As the mezzanine leads to the nest, another walkway, far steeper, will be possible from near the top of the spire down the back side of the structure. This second climb down will have a very different experience – the back face of the temple is vast and extremely simple and faces out into the deep playa with only the mountains beyond. Having experienced the nest just before, this is almost a kind of decompression from the temple journey.

The Mezzanine.
About a third of the way up the spire, the mezzanine will provide a new way of experiencing the immensity of the space that is the spire. A staircase along the inner wall will rise toward the very top of the spire and the nest.

The Nest.
While the mezzanine view is mostly about understanding the spire in a new way, the nest will have sufficient height to provide one of the finest views of the entire city and experience the event in a way we mostly associate with aerial photography.

Ritual plays a huge role in the temple dynamic and the emergence of rituals both implicit and explicit at burning man is especially interesting as they are not proscribe by an authority. Instead, people find their own rituals. Some remain intensely private and individual. Some of course seem natural, obvious, and universal. And some develop and emerge over time to be adopted widely. The tradition of writing on the temple walls (you just can’t call it graffiti) is a prime example of this last most. We do believe that as a work of architecture, the temple can suggest its own rituals as well and we have several in mind.

The Fountain of Time.
We believe this will be the world’s tallest sand glass (hour glass) with enough sand to mark time for the entire week of burningman – from sunrise on the first sunday to the temple burn. There will be no physical tube between the top and bottom bowls – just gravity (hence the name “fountain”). The bottom bowl will have a wide open face and a carved stair step pedestal that will allow people to approach the stream. We hope to supply thousands of tiny vials that will let them capture the moment and take it home with them. We were inspired by the vials people wear on necklaces which house a message written on a grain of rice and kept under oil – these would be the perfect size.

The Handprints.
Leaving handprints is one of the oldest art forms and the spiral is somewhat reminiscent of the caves where you can find this prehistoric tradition. We would love to place the appropriate supplies to facilitate this ritual throughout the temple.

The Panels.
We imagine the entire grove resting on a slightly raised platform (a foot high would be enough. The platform would consist of carved panels with negative spaces you can see through. As you walk across them, you realize they can be lifted away, revealing recesses of various size – perfect for leaving tributes, remembrances, and other objects of significance. As the grove is circular, it would even be possible to arrange the panels in the pattern of the city map.

The Whispering Wall.
The spiral offers the perfect opportunity to create a ritual feature unique to this temple. A whispering wall can run the length of the structure, taking advantage of parabolic reflection so that a whisper spoken at the mouth of the spire will reverberate and can be heard all the way at the other end.

The Burn.
This structure of this temple offers a truly beautiful burn experience. The flame will begin at the alter in the center of the grove. By design it will then race up the back of the structure, climbing the spine along the same path followed by so many pilgrims throughout the week, climbing the spire, reaching up the nest and then engulfing the very peak itself as a great spiraling torch before the rest of the base is lit and the entirety consumed in a general conflagration. The aerial view of this spiral flame would be iconic. Another interesting byproduct of the structure is that the back of the spiral (being much smaller) will burn away first, leaving a tunnel open at both ends. At this point, airflow through the structure will cause it to behave as a giant blast furnace until it consumes itself and collapses.

Ancient handprints on a cave wall. 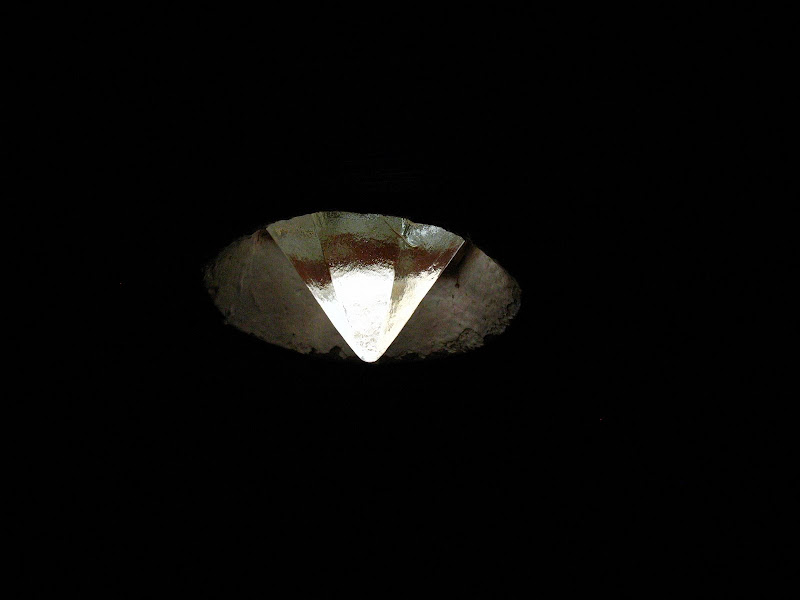 Illumination from a deck prism.